November 20, 2017
In thinking about how children play with music and through music, I was reminded of a fun chanting and clapping game I taught to a second grade general music class to align with their Japan unit. This chant is called "Omochio Tsukimasho" and involves chanting the words while carrying out a clapping pattern to specific rhythms guided by the beat in the lyrics. If you watch, it takes a bit of coordination as well as rhythm to carry out this song successfully!

At first glance, this chant appears to be a simple children's game. However, it is implications for musical, cognitive, physical and social development. According to Lew & Campbell (2005, p. 58), "Play is an important medium for learning in young children's lives-wherever they may be. It assists them in their development of language and reasoning skills, and it fosters social competence and peer-group interaction". Musically, it challenges the players to keep a steady beat and to clap and move to the rhythms accurately. This involves precise physical moments and coordination. Cognitively, it involves memorizing words and associating them with movements. Socially, this game requires cooperation amongst peers. Players must trust each other to perform to the best of their ability and that each child will tap the other's hand appropriately.
This playful game also has cultural significance and has much to tell about the society in which the Japanese children live. The game is a reference to the process of making mochi, a tasty rice cake dessert made by pounding rice into a paste and then molding it into the desire shape. In Japan, it is traditionally made in a ceremony called "mochitsuki".

Here are the lyrics along with a rough translation: 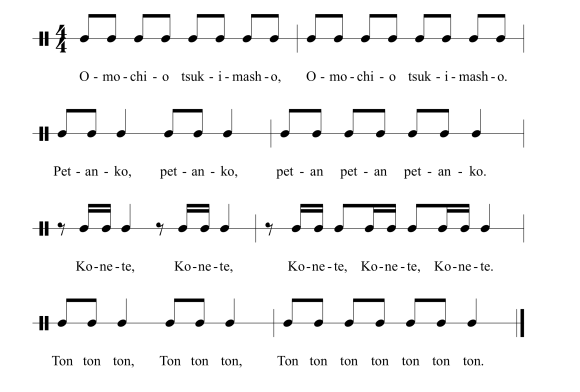 Popular posts from this blog

This week I will be comparing two videos as part of this week's theme of authenticity. Both recordings are a performance of the Chinese classical song Han Tien Lei (Thunder During Drought) composed by Yan Lao-Lie.  The first recording is an arrangement of the song for string quartet (2 violins, viola, and cello). This recording is performed by the Shanghai Women String Quartet.  The second recording is a performance by the Hanshin Chinese Folk and Dance Ensemble. This recording features traditional Chinese instruments such as the erhu, pipa, guzheng, dizu, and yangqin.  If we are to consider the second recording as the more "authentic" performance, several comments on authenticity can be made in comparing the two performances. Considering Palmer's definition of authenticity as a continuum (Koops, 2010), the string quartet performance cannot be absolutely authentic because the music was not originally written for that arrangement. However, it is not far off
Read more

Hi everybody, For my first post, I am sharing a song titled "La Lluvia" which translates to "the rain". It is an example of music from the Andes and is performed by a group named Alpamayo, who performs and records music from Peru and Ecuador. In the recording, you hear a combination of instruments that create the unique sound of the piece. The percussion section establishes a lively rhythm pattern. This main instrument used is probably the cajon. It produces a strong beat, like a bass drum, but can also adjust its percussive timbre. String instruments such as the charango, the national instrument of Peru, and the violin are used. Wind instruments such as Peruvian panpipes and flutes play the main melody. Finally, vocals are heard on the recording through exclamation and trills. I really enjoyed this piece because of its joyous melodies and rhythms. For me, this piece was aesthetically pleasing because it sounded so happy. These are my perceptions as someone
Read more